Author: Gavin Lyall
Former SAS Major Harry Maxim is assigned to Number 10 Downing Street as a special assistant to George Harbiner, private secretary to the Prime Minister, following the suicide of his predecessor with the British Secret Service. Maxim is assigned to protect Professor John White Tyler, Britain's premier military strategist on nuclear weapons policy and famed war hero (as well as an insatiable lecher). Tyler ’s many enemies, including local pacifists, leftists, and radical students, as well as the KGB will do anything, perhaps even murder to keep Tyler from addressing a NATO summit in Luxembourg. However, are various events surrounding Tyler related? Such as a hand grenade thrown through the door to the Prime Minister's residence, or the death of a Czech defector? Assisted by MI-5 liaison officer Alice Algar, Maxim must uncover a horrific secret from Tyler 's wartime past in order to prevent a massive foreign relations disaster, as well as keeping Tyler alive.
Read online or download ebook
Found an error? 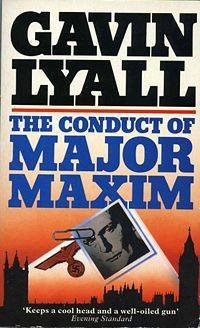 The Conduct of Major Maxim