Author: Michael Moorcock
The Vanishing Tower is where the divergent pieces of Elric's saga are weaved into a single tale; the saga of Elric's dealings with Melniboné, his homeland, related in books one and three, and the saga of his journeys through the Young Kingdoms (as Melnibonéans call the rest of the world), related in book two, come together in book four. Elric and his surviving countrymen are stateless wanderers, mercenaries hated and feared by those in the Young Kingdoms whom they dominated for ten thousand years. Elric is apart from the others (a rogue mercenary band led by Elric's childhood friend, Dyvim Tvar); he and his companion Moonglum are occupied by their own problems, most of the time. One of those problems is the desire if the rest of the surviving Melnibonлans to see Elric's head on a spear. But aside from that, Elric's patron deity, Arioch, is becoming more and more loath to help Elric, his actorios ring, his last link to the ancient dynasty of Melniboné, has been stolen by the king of Nadsokor, city of beggars, and Elric, unused to life as a regular wanderer, has no concept of fiduciary responsibility. (That one tends to be a minor worry, as Moonglum is quite an accomplished thief, and there are no lack of people willing to employ the most powerful sorceror on the planet as a mercenary.) All of these factors weave in and out of the fourth book in the novel, coupled with all the usual strengths and weaknesses of Moorcock's writing in this series, culminating in Elric finally getting to the tower of the title and discovering yet another piece of his fate. It is here that Moorcock throws the series' most intriguing twist into play, but to mention the nature of that twist would be quite the spoiler; you'll just have to read the series for yourself.
Read online or download ebook
Found an error? 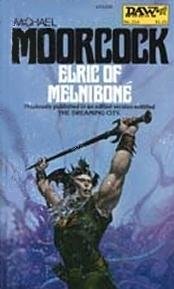 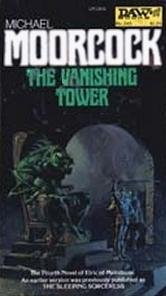