Author: Robin Hobb
The first book in a brand new trilogy from the author of the and trilogies. When the two-hundred year war between the kingdoms of Vania and Landsing ended the Landsingers were left in triumphant possession of Vania's rich coal and coast territories. When young King Troven assumed the throne of Vania thirty years later, he was determined to restore her greatness, not through waging another assault upon their traditional enemies, but by looking in the opposite direction and colonising the wild plains and steppes to their east. Over the next twenty years, cavalry forces manage to subdue the rolling plains formerly wasted on nomadic herders and tribesmen. Troven's campaign restores the pride of the Varnian military and to reward them, Troven creates a new nobility that is extremely loyal to their monarch. Beyond the grasslands lies the current frontier of Varnia, the heavily forested Barrier Mountains, home to enigmatic Specks: a dappled, forest dwelling people, unable to tolerate the heat and full sunlight of the plains. The new settlers find the Specks slightly dim-witted and overly placid, and yet strangely difficult to control. There are tales that they are 'blood-drinkers' and their nature worship of ancestral trees has presented difficulties for those who wish to harvest the forest's exotic timber. They also harbour strange diseases, ones that cause the Specks little more than a week or two of discomfort but which frequently kills those settlers and soldiers who fall victim to it. For that reason, prolonged contact, and especially intimate contact with the Specks is judged both fool-hardy and disgusting. Nevare Gerar is the second son of one of King Troven's new lords. Following in his father's footsteps, a commission as a cavalry officer at the frontier and an advantageous marriage await him, once he has completed his training at the King's Cavalry Academy.
Read online or download ebook
Found an error? 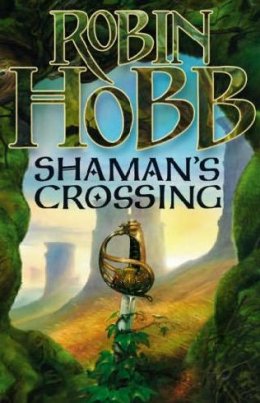