Author: Charles Stross
The sequel to the critically acclaimed returns to the twenty-fourth-century interstellar domain humankind has forged through the godlike powers of the Eschaton, an enigmatic being from humanity’s distant future. Now, in an act of apparent sabotage, one remote interstellar colony, Moscow, has met a disastrous fate: its host star exploded, annihilating an entire solar system and forcing the evacuation of nearby colonies. UN hostage negotiator Rachel Mansour, who is recovering from a showdown with a psychotic performance artist harboring a nuclear warhead, is tagged to make the wormhole jaunt to the scene and investigate. Is one of Moscow’s rival colonies responsible? Is the Eschaton? Improbably, the answers to such questions may lie with Wednesday, a rambunctious adolescent girl whose family is fleeing the expanding explosion, and between whose story and Rachel’s the novel alternates. Stross improves on with better characterizations and entertaining technological inventiveness. Fans of hard SF spiced by political intrigue will relish this dish. Nominated for Hugo and Locus awards in 2005.
Read online or download ebook
Found an error? 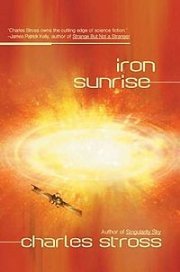