Author: Larry Niven, Jerry Pournelle
The gigantic comet had slammed into Earth, forging earthquakes a thousand times too powerful to measure on the Richter scale, tidal waves thousands of feet high. Cities were turned into oceans; oceans turned into steam. It was the beginning of a new Ice Age and the end of civilization. But for the terrified men and women chance had saved, it was also the dawn of a new struggle for survival — a struggle more dangerous and challenging than any they had ever known… Nominated for Hugo Award for Best Novel in 1978.
Read online or download ebook
Found an error? 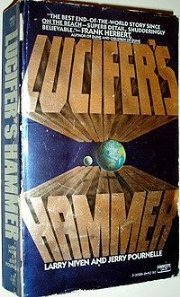