Author: Charles Stross
Bob has been behind a desk for too long, busy indexing and archiving the Laundry's secret files, and he's longing for a break when his wife, Mo, announces that she's landed a teaching assignment at a staff college in Cambridge. And he's worrying at the problem of a missing manuscript – an unfinished policy document found in the personal effects of Major-General J. F. C. Fuller (rtd) after his death – which is absent from the Laundry archives. (Fuller was not only the tactician who first invented Blitzkrieg warfare in 1917-18; he was also #2 to Aleister Crowley in the OTO, and a heavyweight Cabalist.) So Bob follows Mo to Cambridge, and is startled to find a Russian spy sneaking around after him. The Fuller Memorandum is missing, and the FSB want it badly. It's got something to do with Fuller's occult obsessions, and something to do with the Laundry's creation in 1941. But Bob doesn't realize just how much is at stake until someone tries to kill Mo, and his boss Angleton starts behaving oddly before lapsing into a coma. The theft of Fuller's document is at the heart of a murderous conspiracy rooted in the GULAGs, and Bob is dumped into a deadly race against time – because if he can't work out where it's been hidden, and how it's connected to Angleton's mysterious illness, it's going to be curtains for the Laundry (and possibly the world) as the cultists of Chernobog try to raise darkness at noon.
Read online or download ebook
Found an error? 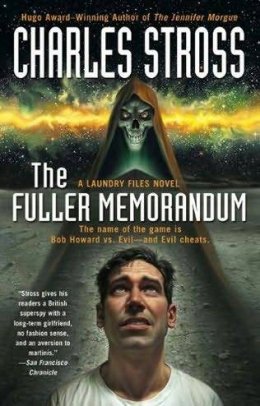