Author: Connie Willis
In the Hollywood of the future there’s no need for actors since any star can be digitally recreated and inserted into any movie. Yet young Alis wants to dance on the silver screen. Tom tries to dissuade her, but he fears she will pursue her dream — and likely fall victim to Hollywood’s seamy underside, which is all to eager to swallow up naive actresses. Then Tom begins to find Alis in the old musicals he remakes, and he has to ask himself just where the line stands between reality and the movies. Nominated for Hugo Award for Best Novel in 1996.
Read online or download ebook
Found an error? 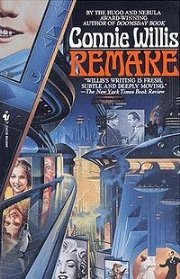