Author: Christopher Haave
Lt Col Phil M. “Goldie” Haun (BS, Harvard University; MA, Vanderbilt University) is from Cecilia, Kentucky, a weapons school graduate, and had A-10 assignments in England, Korea, Germany, and Alaska. Colonel Haun attended ACSC and SAASS and is curently serving as the operational officer of the 355th Fighter Squadron (FS) at Eielson AFB, Alaska. Col Christopher E. “Kimos” Haave (USAFA) commanded 81st FS “Panthers” during Operation Allied Force (OAF) and is currently the commander of the 612th Air Operations Group at Davis-Monthan AFB, New Mexico. Kimos had A-10 assignments in England and Germany and flew AT-38s in New Mexico. Colonel Haave is Olmsted Scholar and a graduate of the French Joint Defense College. Colonels Haave and Haun organized the firsthand accounts of members of the 40th Expeditionary Operations Group into this book. Their descriptions of the application of airpower—a new wingman’s first combat sortie, a support officer’s view of an FS relocation during combat, and Sandy pilot’s efforts to find and rescue a downed F-177 pilot—provide the reader with a legitimate insight into an air war at the tactical level and the airpower that helped convice Milosevic to capitulate. Opinions, conclusions, and recommendations expressed or implied within are solely those of the editors and do not necessarily represent the views of Air University, the United States Air Force, the Department of Defense, or any other US government agency. Cleared for public release: distribution unlimited. There are certain dates in the history of warfare that mark real turning points…. Now there is a new date on the calendar: June 3, 1999, when the capitulation of President Milosevic proved that a war can be won by airpower alone. —John Keegan, London’s Disclaimer
Read online or download ebook
Found an error? 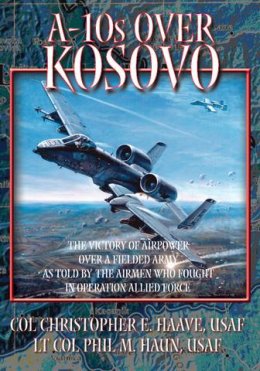