My books
Ebooks Library » Political Detective » Seven Days in May

Seven Days in May

Author: Fletcher Knebel, Charles Bailey II
"Gentleman Jim" Scott was a brilliant magnetic general. Like a lot of people, he believed the President was ruining the country. Unlike anyone else, he had the power to do something about it, something unprecedented and terrifying. Colonel "Jiggs" Casey was the marine who accidentally stumbled onto the plot. At first he refused to believe it; then he risked his life and career to inform the President. Jordan Lyman was President of the United States. By the time he was finally able to convince himself of the appalling truth, he had only seven days left to stop a brilliant, seemingly irresistible military plot to seize control of the government of the United States. Seven Days in May is a political thriller novel written by Fletcher Knebel and Charles W. Bailey II and published in 1962. It was made into a motion picture in 1964, with a screenplay by Rod Serling, directed by John Frankenheimer, and starring Burt Lancaster and Kirk Douglas. The story is said to have been influenced by the right-wing anti-Communist political activities of General Edwin A. Walker after he resigned from the military. The author, Knebel, got the idea for the book after interviewing then-Air Force Chief of Staff Curtis LeMay.
Read online or download ebook
Found an error? 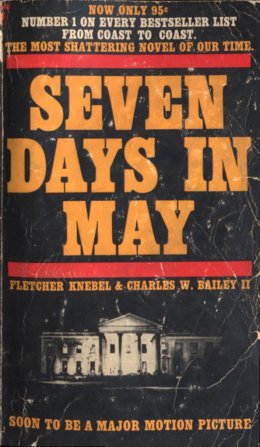