My books
Ebooks Library » Historical Detective » The Devil in the Marshalsea

The Devil in the Marshalsea

Author: Antonia Hodgson
WINNER OF THE CWA HISTORICAL DAGGER AWARD 2014. Longlisted for the John Creasey Dagger Award for best debut crime novel of 2014. London, 1727 – and Tom Hawkins is about to fall from his heaven of card games, brothels, and coffeehouses to the hell of a debtors' prison. The Marshalsea is a savage world of its own, with simple rules: those with family or friends who can lend them a little money may survive in relative comfort. Those with none will starve in squalor and disease. And those who try to escape will suffer a gruesome fate at the hands of the gaol's rutheless governor and his cronies. The trouble is, Tom Hawkins has never been good at following rules – even simple ones. And the recent grisly murder of a debtor, Captain Roberts, has brought further terror to the gaol. While the Captain's beautiful widow cries for justice, the finger of suspicion points only one way: to the sly, enigmatic figure of Samuel Fleet. Some call Fleet a devil, a man to avoid at all costs. But Tom Hawkins is sharing his cell. Soon, Tom's choice is clear: Get to the truth of the murder – or be the next to die. A twisting mystery, a dazzling evocation of early 18th-Century London, The Devil in the Marshalsea is a thrilling debut novel full of intrigue and suspense.
Read online or download ebook
Found an error? 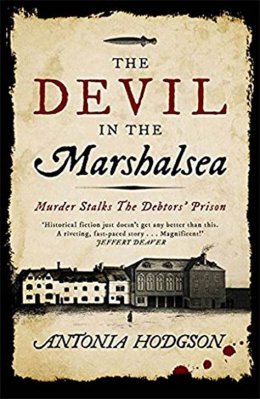