Author: Elmore Leonard
Nobody writes novels like Elmore Leonard, with his crackling dialogue, breathless pacing, and hilarious hard-luck, unfailingly human characters. In his sizzling new novel, the New York Times best selling author crosses continents to tell an adrenaline-charged story of crime and retribution-where double crosses become triple crosses, revenge is where you find it, and absolution is just around the corner. Father Terry Dunn hears a lot of strange confessions. After all, he's the only priest for miles in the lingering aftermath of the worst massacre Rwanda has ever seen. And Fr. Terry, who has forty- seven bodies in his church that need burying, has just heard one confession too many. After exacting from them a chilling penance, Fr. Terry has to get out of Africa-pronto. Now Terry is coming home to Detroit, where a five-year-old tax-fraud indictment is hanging over him. Is Terry Dunn really a priest? He certainly doesn't act like one. A fugitive felon on two continents, Terry is being pursued by a cigarette-smuggling cohort, who rolled over on Terry to save jail time-yet still demands his share of the money. But Debbie Dewey has other plans for Terry. She's just been sprung from a three-year fall at Saw- grass Correctional for aggravated assault…and is now trying to make it as a stand-up comic. Debbie and Terry hit it off beautifully. They have the same sense of humor and similar goals: Both of them want to raise a whole lot of cash. Terry, for the children of Rwanda; Debbie, to score off a guy who owes her sixty-seven thousand dollars. It's Debbie who keeps prying, until she learns the bizarre truth about Terry; Debbie who sells him on going in together for a much bigger payoff than either could manage alone. That is unless the priest is working a con of his own. With an unforgettable cast of oddballs and schemers-including a mob boss on trial, an unlikely assassin called Mutt, an ex-con con artist who dreams of doing stand-up, and a priest who may not be a priest- Pagan Babies is Elmore Leonard at his double-dealing best. In the hands of this master, the stakes are always life and death. Crime fiction doesn't get any better. ELMORE LEONARD is the author of thirty-six novels, including such bestsellers as Be Cool, Cuba Libre, Out of Sight, Riding the Rap, Pronto, Rum Punch, Maximum Bob, Get Shorty, and numerous screenplays. He and his wife, Christine, live in a suburb of Detroit. Visit the Elmore Leonard website at www.elmoreleonard.com.
Read online or download ebook
Found an error? 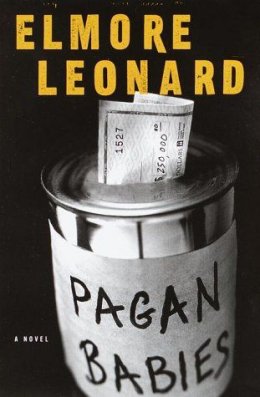