Author: Debra Cameron, James Elliott, Marc Loy, Eric Raymond, Bill Rosenblatt
GNU Emacs is the most popular and widespread of the Emacs family of editors. It is also the most powerful and flexible. Unlike all other text editors, GNU Emacs is a complete working environment—you can stay within Emacs all day without leaving. , 3rd Edition tells readers how to get started with the GNU Emacs editor. It is a thorough guide that will also "grow" with you: as you become more proficient, this book will help you learn how to use Emacs more effectively. It takes you from basic Emacs usage (simple text editing) to moderately complicated customization and programming.The third edition of describes Emacs 21.3 from the ground up, including new user interface features such as an icon-based toolbar and an interactive interface to Emacs customization. A new chapter details how to install and run Emacs on Mac OS X, Windows, and Linux, including tips for using Emacs effectively on those platforms. , third edition, covers: • How to edit files with Emacs • Using the operating system shell through Emacs • How to use multiple buffers, windows, and frames • Customizing Emacs interactively and through startup files • Writing macros to circumvent repetitious tasks • Emacs as a programming environment for Java, C++, and Perl, among others • Using Emacs as an integrated development environment (IDE) • Integrating Emacs with CVS, Subversion and other change control systems for projects with multiple developers • Writing HTML, XHTML, and XML with Emacs • The basics of Emacs Lisp The book is aimed at new Emacs users, whether or not they are programmers. Also useful for readers switching from other Emacs implementations to GNU Emacs.
Read online or download ebook
Found an error? 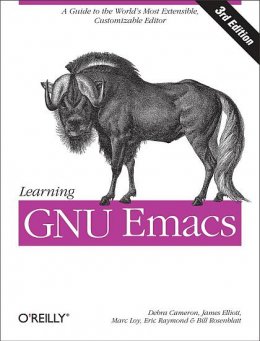