Author: Robert Parker
Wyatt Earp, Billy the Kid, Doc Holliday, Tombstone, the O.K. Corral--the icons are so firmly embedded in American history that we might know nothing more about them than their names. But in this spare, moody riff on the events leading to the 1881 shootout at the O.K. Corral--the signature battle defining the violence of the Old West--Robert B. Parker shades the black-and-white starkness with shifting tones of gray. Parker moves beyond the Hollywood version of the shootout to explore the tangle of family loyalties, dirty politics, and passion that embroiled Wyatt Earp before and after his encounter with the Clanton gang. In Parker's version, the longstanding rivalry between the Earps and the cowboys may stem from cultural difference (the Clantons were ranchers who held Confederate sympathies during the Civil War; the Earps were townsfolk who had Union loyalties), and it may be exacerbated by alcohol, machismo, and fiery accusations from both sides. But the spark that leads to the final conflagration is simpler: Wyatt falls in love with Josie Marcus, Sheriff Johnny Behan's beautiful, self-assured companion. Parker's Wyatt Earp is, like his detective hero Spenser, by turns arrogant and humble, and Earp's firm-jawed struggles with honor, family, and love will feel familiar to fans of that long-running series. But the author has abandoned the series' relatively intricate plotting and its touches of goofy humor. The novel is a curious amalgamation of inexorably linear narrative and moments of static contemplation. It drifts like a tumbleweed through Tombstone, leaving two- and three-month gaps, pausing briefly to dip into moments of conflict and moments of peace. Gunman's Rhapsody --Kelly Flynn
Read online or download ebook
Found an error? 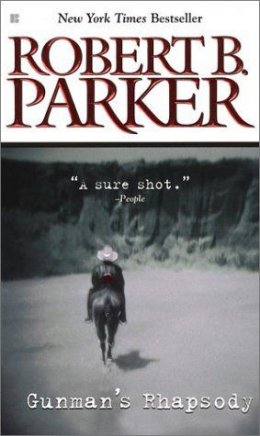